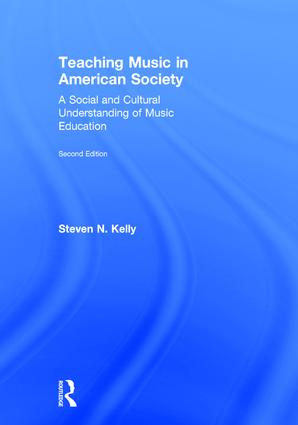 
Schools in the United States are required to manage an increasingly changing and diverse student population reflective of population trends across America in general. An implication of classroom diversity is that for many students, schools will be their only exposure to cultures different from their own. This multicultural experience helps to break down stereotypes and foster acceptance of different lifestyles. Music education should contribute to this experience by providing opportunities for students to interact and learn from each other, not just from a single perspective.

Clearly music has important value to our society and to humans worldwide because it is a universal phenomenon of everyday social interactions. This conclusion represents a social perspective shared by many acclaimed music researchers. The ethnomusicologist Bruno Nettl stated that music is one of the few human phenomena shared in every culture around the world. The anthropologist Alan Merriam indicated both the sheer amount of music present in the world and the central role it so often plays in human activities makes music a significant influence on human behavior worldwide.

Anthropologists report that music behaviors can be found dating back to the earliest periods of human existence Nettl, As music has survived human evolution it can be assumed that musical behaviors have been handed down through generations, demonstrating that from its inception, music education has been a way for skills and information valued by human beings to be transmitted.

Consequently in our global world, to study music is to participate in a global behavior conducted through universally accepted practices. Being aware of the wide variety of sociological factors influencing society is a challenge for teachers in our country. Understanding their role as socialization agents requires teachers to view student behaviors from different cultural perspectives. The noted anthropologist Clifford Geertz said that to understand human diversity we must understand the diversity of human cultures.

Thus, from a social perspective, it is important that effective teachers learn the culture of the students in their classes, but also the culture of the schools where they teach, and the community served by the school. Teachers must recognize that each student brings a diverse background of social, musical, and academic experiences into every class.

Effective music teachers understand and recognize their role in an active dynamic classroom full of social interactions, each a learning experience in itself. Having knowledge of other cultures outside their own can help music teachers understand the diversity of human behavior and assist in devising strategies that addresses student needs and maximize instructional effectiveness. Why have sociological issues become more prevalent in schools? How can music curricula be more reflective of cultural and musical diversity?

According to the sociological perspective, everything that humans know is learned. If music is not a genetic endowment why is it part of every known culture?

How do schools resemble a multicultural society? What characteristics of music classes may define them as a culture with a school society? If society embraces the concept of cultural diversity, should schools expect every student to achieve at the same level? To what extent should music teachers impose their cultural values on the music their students listen to and participate in? How do educators handle situations where the values learned in school conflict with values learned at home? Do schools reflect the product of society or does society reflect the product of schools?

How should this information be used? Understanding the relationship between society and education requires an awareness of the fundamental social theories influencing human behaviors. Theories help educators understand more than just words, but contexts as well. Theories are neither true nor false; they are credible based on logic and information that has some degree of validity. The value of theories is in their use toward organizing and understanding events and behaviors. Theoretical social perspectives are frequently based on historical comparisons, political authority, economic issues, laws, religious beliefs, and the extent of growth in individualism, as well as societal ethics and values.

No theoretical perspective has an absolute answer.

Diverse perspectives have contributed to the debate regarding the role of music in American society, and the place and stature of music in our schools. Fundamental Sociological Theories Theories often lead to the formation of theoretical paradigms that are basic images or ideas of society that guide sociological thinking Ballantine, Theories and paradigms define and help conceptualize beliefs, behaviors, and relationships. Many competing theories attempt to explain the roles, functions, and relationships of education and society.

Teaching music in American society : a social and cultural understanding of music education

However, three principle theoretical views form the basis of many sociological attempts to explain the relation of modern society to education: functionalist theory, conflict theory, and interaction theory. Because each theory views society and education differently, they often form the foundation of educational debates in our country. As such, each theory remains very influential on contemporary educational thought and methodology.

The wellbeing of the group is the center of focus. By working together and assuming an equilibrium model, each part promotes solidarity and the stability of society. Our lives are influenced by the resulting social structure or stable patterns of behavior. Every societal component plays an important unique role and yet is interdependent on every other component. Thus, all parts of a society are interrelated, integrated, and necessary for society to work or function properly Durkheim, The French sociologist Emile Durkheim — advocated functionalism.

Rooted in the political and social upheaval in France from to , Durkheim believed changes in social institutions were brought about through political reform and scientific advances which enhanced the quality of society. He was the first to suggest that to understand an individual one must not look at the individual, but rather at the society of which that individual is a member.

He believed individualism and self-interest threatened the cohesion of social institutions and undermined the authoritative nature of group life. As a result, Durkheim thought growth of individual autonomy came at the expense of the good of the collective forces in society.

Functionalism perceives schools as the most efficient institution for controlling what values and behaviors are needed to benefit society. Functionalists view schools as tools that socialize individual students into the larger economic, political, and social institutions in society. Socialization is accomplished by providing models of existing practices and requirements for individuals.

For society to prosper it must train members to be productive and perform required roles. One function of schools is to develop, sort, and select individuals by ability to fill hierarchical positions. The selection of leaders is based on merit and talent. Functionalism assumes that the more educated an individual, the more productive and valuable to society that person becomes.

Conflict Theory Conflict theory is characterized by a dichotomy between conflict and domination versus oppression. A degree of alienation and identifying power relationships are key components of conflict theory. In contrast to functionalism, conflict theory assumes there is constant tension in society due to all societal parts being created by competing interests of individuals and groups Morrison, This results in an unequal distribution of status and wealth that is constantly shifting among groups.

Once the tension becomes too strong, change occurs by force. This theoretical approach is based on the writings of two Germans, Karl Marx — and Max Weber — Marx was outraged over the social conditions of exploited workers in a class system that resulted from capitalism. He speculated how in a society so rich, there could be so many who were so poor. Marx recognized social change would not come easily or quickly. Through class consciousness, the recognition by workers of their unity in opposition to capitalism, workers would rise up en masse to overthrow the existing power group.

The struggle for power thus helped to determine the structure and function of various organizations and their hierarchy within society. However, where Marx had faith that humans could change society through scientific growth, Weber was less optimistic about the capacity of society through science to bring about real change in human conditions Weber, He was concerned about the dehumanization of society while believing that humans could shape society. Weber perceived an increase in the division of labor and bureaucracy resulting in an oppressive routine, rising secularism, and an increased loss of individual freedom.

Differing slightly from Marx, Weber believed societies differ primarily in terms of how their members think about the world. These ideas have transformative power capable of improving the human condition. According to conflict theory, schools exist to serve the dominant group by providing social reproduction of the economic and political status quo Ballantine, Schools reproduce the attitudes and dispositions required for the continuation of the existing group in power. Accordingly, the primary purpose of schools is to teach a particular cultural status representing the dominant social group perspective.

Skills and knowledge are taught when the learner needs them and not when the curriculum mandates it. Education is product-orientated and is applied to get results and attain goals. They believed education systems perpetuate existing class structure through social reproduction of existing social characteristics and expectations. Social reproduction, the intentional reproduction of existing social status, was attained through tracking and ability grouping thus contributing to different social classes. Leaders of the power group selected individuals who were best qualified for jobs at different levels of the social hierarchy.

Society is a shared reality constructed by its members as they interact with each other. Because humans define themselves, their perceptions of reality vary and are constantly changing Cook, Also known as social constructivism, reality and knowledge are socially constructed through a process that involves the use of cultural symbols. Symbols such as language or music help make reality unique to each person. The interactive theory is based on the writings of American philosopher and sociologist George Mead — Mead believed society was in a state of constant change based on the existence of constant human change.

His approach was known as social behaviorism. According to Mead, the self emerges from social experiences with other humans through interactions. Human interactions result in an exchange of symbols that aid in making sense of our culture. To understand how other humans view us we must imagine how another person may perceive us. Our actions are often guided by how others respond to and perceive us. Hence, the capacity to view ourselves through others is essential to developing our sense of self-image.

Thus, the development of self is inherently a social product. Cooley coined the term Looking-Glass Self to designate the image people have of themselves based on how they believe others perceive them.